This morning (Wed 24th October) after my morning beach dance ritual, I witnessed some strange workings on the beach, in the afternoon it looked like this from my favorite spot Dinas Oleu: 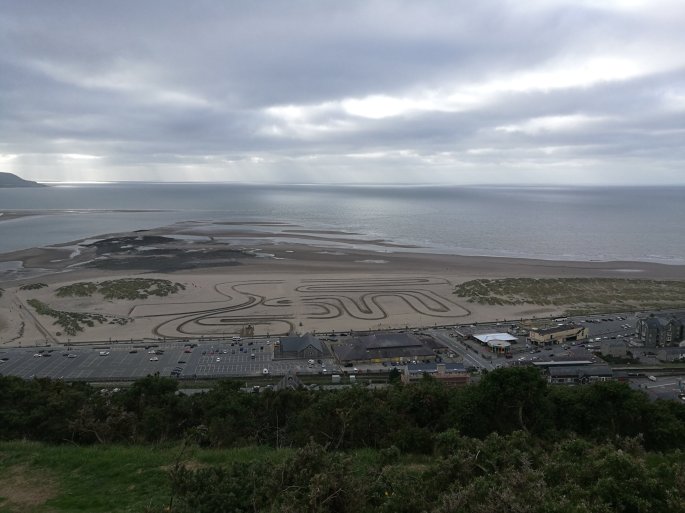 I asked the man who was directing the digger operator, what this was for: There will be a motorbike race going on over the following weekend. And the forcast is for temperatures around zero and some snow. It feels like a good moment to travel on after having had such a beautiful and intense time here; heading to Dublin via the ferry from Holyhead tomorrow.

While in Barmouth I did continue my morning beach dancing practice which was fun. I did not quite follow the plan to write a post every day. Possible titles could have been: Playing the Bass Drum, More from the Mawddach Trail, The Last Haul, etc.

My time in Barmouth has been very rich and I want to say eventful, although most events somehow took place inside of me. Outside I connected to friends and colleagues online and I went on my walks and regular visits to the lightful Dinas Oleu. But instead of meeting new people in Barmouth, I seem to have met a few new parts of and in myself who I had not really appreciated until now. It feels great to welcome them and have them be part of my life from now, some I do not find so easy to love, but still happy I found them. The title of my blog ‘Walking to Wholeness’ becomes true, I am walking towards more wholeness inside of me. The two weeks in Barmouth feel like some of the most transformative times in my life. I shall take care to integrate what I learnt and felt.

Regarding some of the outside activities, playing the Bass Drum was fun. In my attempt to meet local people, I joined the local Batala Bermo group for one of their evening practices. The group had advertised in the local event magazine, always on the lookout for new members for their Samba percussion group which is part of the global Batala Project. On that evening 12 to 15 drummers gathered in the local discotheque, one of the drummers had brought a second drum, he wanted to try a lighter drum that evening, and I was given his bass drum. Somebody else provided me with knee protection (!), the drum is hanging around knee high, and drum sticks. As one of the bass drum players, my task was to keep the rhythm for the other players to follow. I enjoyed that and it did not really matter that I only slowly learned to follow the signs of the conductor, the smaller drums needed to be able to read, but the bass drums hardly ever played something different than the basic beat which seems to come quite naturally to me. The whole event was loud if not to say noisy, everybody was wearing ear protection, I stuffed paper tissue into my ears. In the break I talked to some of the other players and had a little tiny taste of their lives, most came from other towns along the coast and are driving to Barmouth once a week to join the group.

I did walk the Mawddach Trail backwards, took the bus to Dolgellau and walked along the estuary towards the sea. When walking into the land, I had been so taken by the beauty of the surroundings and felt very energized at the end of the day, now walking towards the sea the experience was different, it seemed to be about letting go. Particularly around Penmaenpool, where I walked over the bridge to the other side for a little break in the sun – the side I was walking on was mostly in the shade – I felt like something was dropping of my back, a nice freeing feeling. And then more of that further towards the sea. On the trail, I met a couple, two cyclists, first at a gate at the beginning of the trail and then again later when they were on their way back after having had lunch in Barmouth. When we met the second time they stopped for a longer conversation around what it means to connect to nature while in it, there seem to be so many different ways of being in nature. They were concerned that young people these days who spend time in nature, do not appreciate it or even see it, as they continue to stare onto the screens of their phones. I also learnt something new about the history of the area when walking the trail for the second time, during the 1860s Dolgellau was at the centre of a little gold rush with two gold mines and jewellery from that gold apparently is still produced and sold. Non of my new parts inside of me bought me a golden ring yet 😉 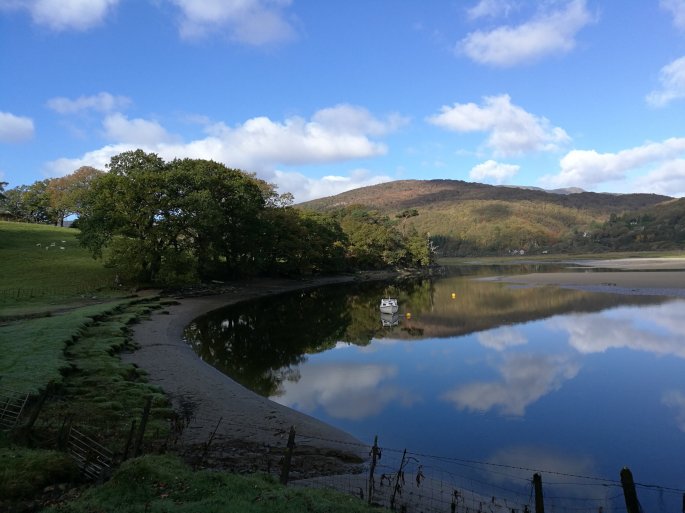 Above the bridge at Penmaenpool. Some additional information on Penmaenpool on this sign: 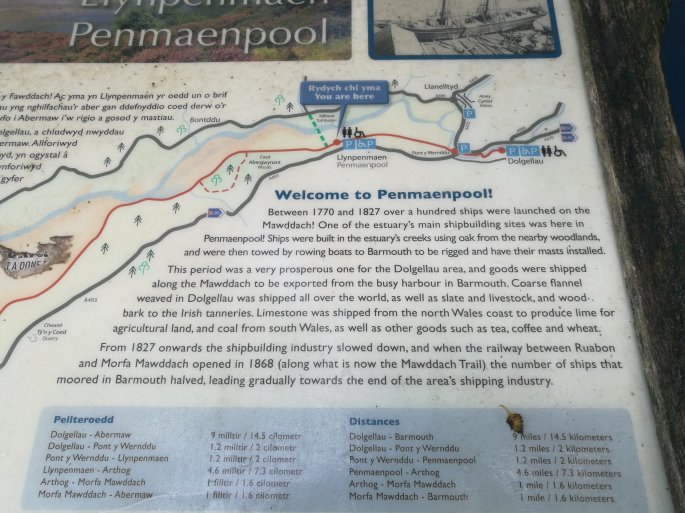 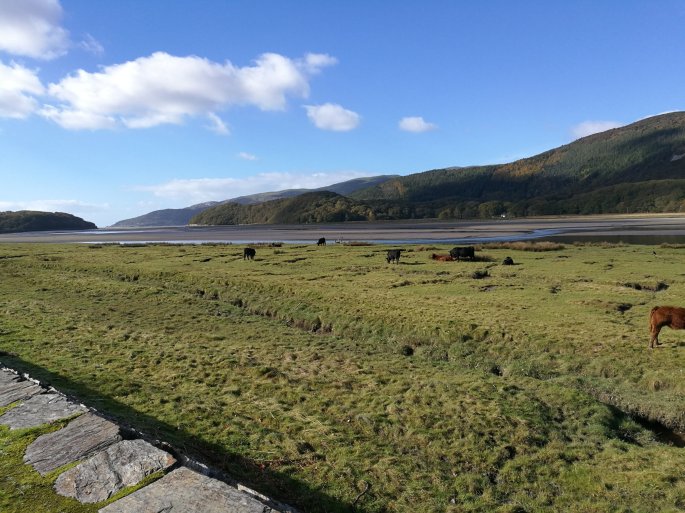 Last Haul is the name of a sculpture of fisherman haulting nets from the sea, a memorial to Barmouth’s once flourishing fishing industry. It was commissioned by Barmouth council for the Millennium celebrations. The interesting part is that it is from white Italian Carrara marble from a ship wreck that was found off the cost of Barmouth. The marble must have been in the water for a long time before it was found by local divers in 1978, then one block of marble was raised. The ship carrying the marble sank in the early 18th century, I read, and that it is not clear where the marble was being transported to. 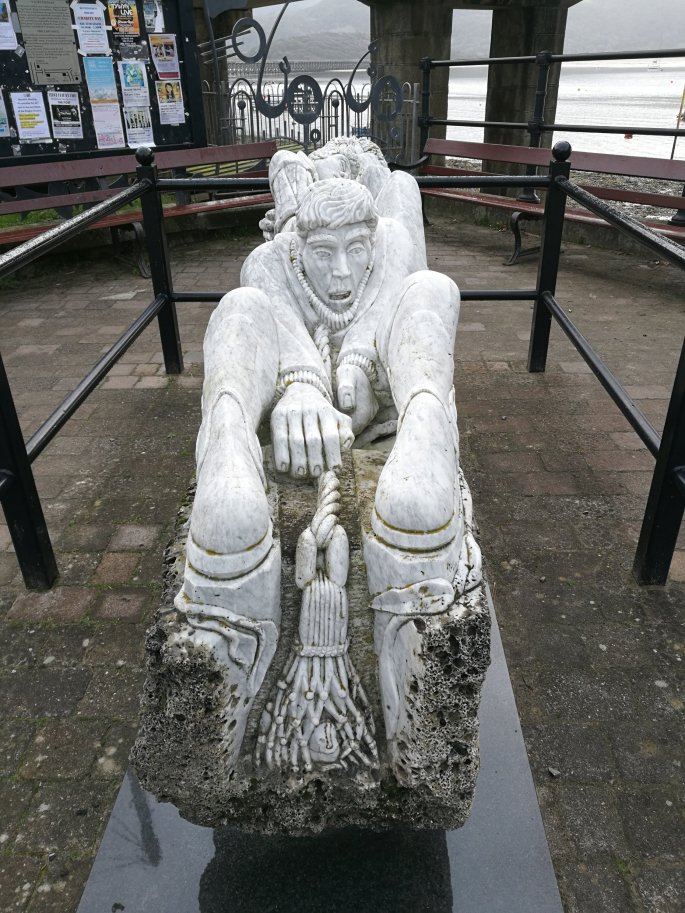