Greetings from Glastonbury. I am back in this delightful town and the sun is with me, blue skies most of the days. I enjoyed walks on to the Tor and into the Abbey Gardens, actually I am a member of the Abbey Gardens now, I can sit and stroll around as often and as long as I want for one whole year. Already taking advantage of it nearly every day.

But first I want to connect back to my last post. My time in Berlin developed beautifully. My friend Don came to visit and we enjoyed some cycling in Berlin, exploring the main landmarks of the city and rediscovering (for me) some places I had not visited for a few years. Then the Baltic Sea was calling, I did not feel energetic enough to go for another bicycle trip, so we tried a combination, we rented a car big enough to store the bikes in, and drove north to the Sea, on the way we visited friends, indulging on fresh fruit from their garden. Then we camped on a small island, Poel, near Wismar, the Darss and on Ruegen, the island with the famous white rock (Kreidefelsen). At most of the places we enjoyed having the bicycles to explore, get closer to the beach to rest, roll in the sand which I love and swim in the sea. I liked that we could get to new places a little faster with the car, a nice effect was also my becoming more confident in driving again which feels important for me at the moment. As my full time travelling is slowly coming to an end, I get the feeling that I want to live in the countryside and imagine that I will need a car from time to time.

And then I was off to Scotland again, for a workshop week in Findhorn. On the way, I spent two nights in Edinburgh, particularly to discover an ancient volcano, the hill of the city, called ‘Arthurs Seat’. I did not know that this place was so popular. When I climbed it for the first time, I shared the top with lots of visitors, small and big groups, all enjoying the walk up and mostly the views of the city and bay. The next day I started earlier to escape the masses. It worked, I found myself only with a few other people on the top, more quiet and time and place to sit and connect with the rock.

In my crystal class that I took in July, I learnt to use a certain crystal to get into contact with the plant kingdom and I experimented with that same crystal to get into contact with this old volcano on which I was sitting. It worked, I did indeed receive a message, fairly unexpected, ie not something that had been on my mind so much. The message was to start passing on what I have learnt over the last two years. Also a particular training that I had known about but not considered taking until then, came to mind, it seemed to be the best platform to launch my getting out more with my new skills. The next day I applied to participate in the training and was offered a place.

I realized again that for me listening to the land is always a good idea and following my impulses of where to go.

The week in Findhorn was intense and insightful as always, I met up with old friends and made a new friend too. Where before in my free time, I had been mostly drawn to the beach, this time I also enjoyed the dune land which one walks through to get from the park (where the community is situated) to the ocean. Before, I sometimes got lost in the dunes and resented the time lost for spending near the sea, this time I enjoyed getting lost, stopped, sat for a while, did not feel like needing to get anywhere and discovered new plants and tiny colorful flowers while walking up and down along narrow paths. The inbetween is becoming more attractive to me. 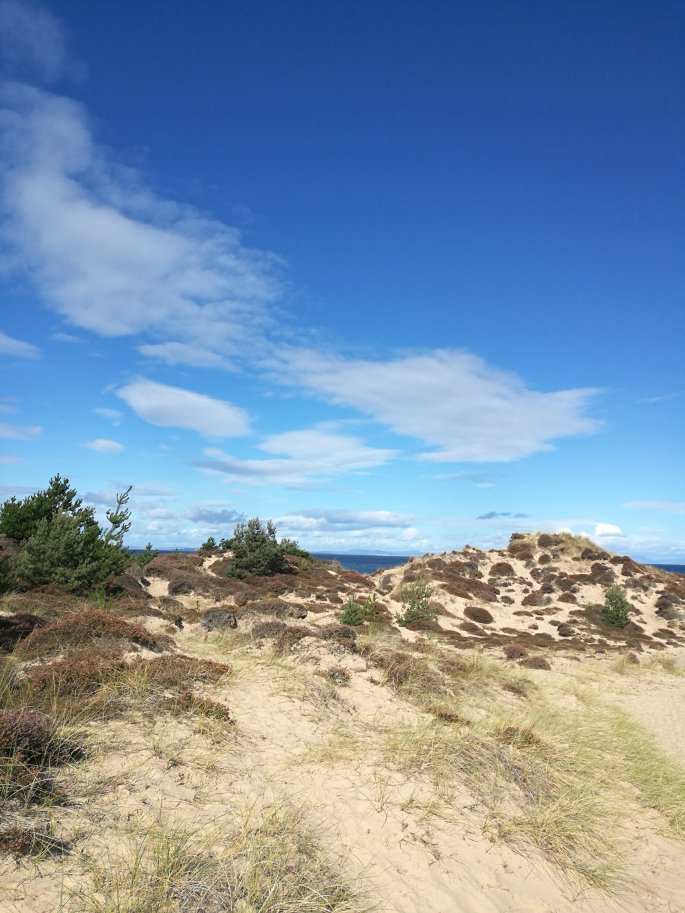 After the workshop in Findhorn I made a return visit to Don in his home in England. We had some plans to visit Wales, but then I was slowed down by a cold and instead we tried some play reading, mostly Shakespeare, some of Macbeth. Often I did not really understand what I was reading, but as Lady Macbeth I clearly felt her energy, not sure if I liked it, but it was more than interesting. Then a day trip to Shakespeare’s town, place of his birth and death, Stratford-upon-Avon. The town is full of sculptures showing characters from his plays. We had an excellent lunch in the rooftop restaurant of the Royal Shakespeare Theatre, however did not resonate with any of the two Shakespeare performances that evening and instead got tickets for Jane Eyre in the small and wonderful Attic Theatre. The performance was excellent, in an intimate space with 40 spectators and 7 actors, I felt completely immersed in the play, really well done. One of the young actors was with us on the train back to Birmingham. 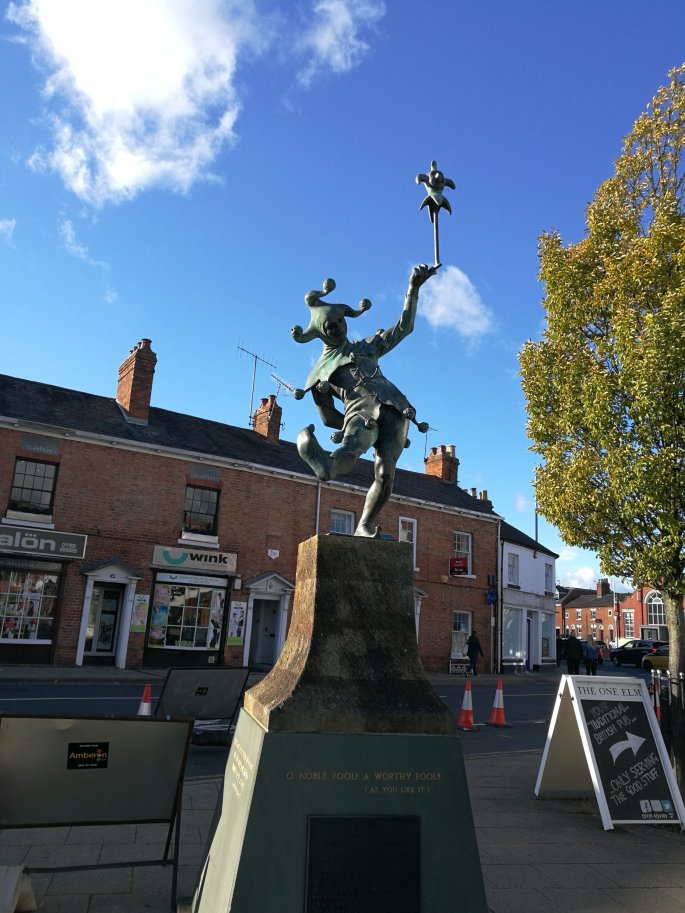 And then the land was calling again, my walking practice and my explorations in talking to trees. Glastonbury seems to be an excellent place for that with the reviving energy, the Tor, the Abbey Garden.

My first airbnb host ‘sent’ me to an interesting evening talk on my first night, very inspiring. This time I hear people talking about yet another type of line, the synchronic line. Glastonbury has two of those nearby and thus, synchronicity can happen more often here than at other places, ie me choosing an airbnb and the host sending me to the ‘right’ event.

It was not so easy to find an airbnb in the first place. Glastonbury seems busy this time of year, lots of visitors and tourists. So, after three days in one airbnb, I moved to another place for 5 days. In the monthly local event listing, I found a workshop on communicating with plants which I participated in yesterday. There was a whole group of people for which the workshop was just one of a series of things they do as part of a longer trip, and then a few people like me, who dropped in for the day. It was held in a beautiful place called Paddington Farm which I had walked past back in february. As part of the workshop we each connected to a tree that seemed attractive to us. We were instructed to connect with all our senses, first see the tree, then feel it with our hands, smell it, taste it and then listen to it. And indeed each tree started to share some information when we sat down with our back to it. We later shared our experiences in the circle. We also all came back with a drawing of our tree. After some more input about communicating with plants in general we were asked to write a poem on the paper with the drawing. Again everybody (around 20 participants) shared their poem, amazing results, some of them very touching. And then we were sent back to our tree and offer our drawing and poem to the tree, digging a little hole near the tree and leaving the paper there.

All in all a very happy day, even more so as I could deepen my connection with lime trees as when we were first sent to find ‘our’ tree I was drawn to a little forest and there to a lime tree. In the last few weeks and more since I am in Glastonbury, I have connected to lime trees, sat near them, ‘talked’ to them. It feels good to concentrate on one type of tree. I seem to fall into some kind of breathing with the tree more easily each time I connect.

I can definitely recommend connecting to trees, it is soothing, comforting and messages can be surprising and helpful. 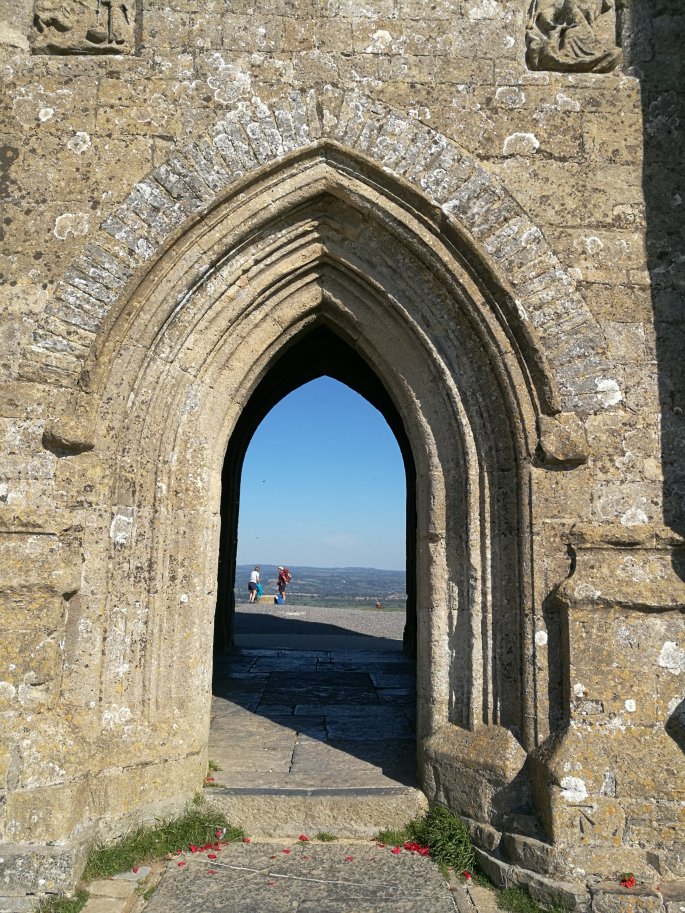