I am back in Berlin, landed here nearly a week ago. Good to be back and slowly getting used to the time zone and the winter weather.

My last few days in New Zealand I spent with my friend M. in the North of the North Island. We had some very good times, some more walking, one day we hitchhiked to the Bay of Islands and walked part of a coastal walk that I had already enjoyed in the beginning of my NZ journey. And we discovered some really nice walks on an old railway track near to her new home town.

It was very special to see and experience the still smoking volcanos and endless beaches with sometimes very few people on them and the beautiful trails through the bush.

My walking practice seems to allow me to connect to places ever more deeply and feel some of what is stored there. I was also more aware than on previous trips of the different atmospheres I experienced in hostels and campsites, the most welcoming and social I found in the National Park Village where I spent Christmas. In the future when travelling alone I would try to look out for small and privately run places.

During a weekend workshop I had the idea to bring my walking practice not only into the nature around Berlin but right into the city center. Yesterday I walked with a fellow collective fields researcher. We started at Alexanderplatz and walked along the river Spree. I introduced him to my practice and then we shared our feelings, two very interesting and rich hours. I am intending to invite friends for weekly walks as long as I am still in Berlin. So good to share the practice and walk together.

My next blog posts will most probably be about city walking in Berlin.

I basically travelled into the New Year. Borded the night bus to Auckland when the new year had just started and continued in another bus up North. I am back in Whangarei where I spent a few days about a month ago. There are more walks here to be explored and possibly some to walk again.

It feels good to be back in Northland. I like the open skies, it might have a similarity to the part of Germany where I was born, the North. Also the weather seems to be bit more stable and I ll see these beautiful beaches again.

But back to the National Park first:

The volcano Mt. Ngauruhoe fascinated me enough to get me do the Tongariro Crossing again. The forcast for Dec 30th was exceptionelly good, so I left, this time from Turangi in another shuttle at 6.15am in the morning. I walked alone, well alone in a constant stream of up to 4000 people doing the Crossing every day. Very different experience. I did not have the challenge of the freezing cold and the snow and the strong winds, but instead the challenge to climb the volcano. While on Christmas Eve there had not even been the slightest doubt in me that I would be able to complete the trail, this time I was nervous. Did I put myself into unnecessary danger, would I be strong enough to walk the whole trail and climb the volcano? I was, but just about. It was a real challenge with some scary moments. Fitting to what I wanted to transform by climbing this mountain. After some more reflecting I had decided that it all came down to love and I asked the mountain to help me heal the flow of love in my maternal ancestral line. Nothing less, asking the volcano to rekindle the fire of love in me. Also the day was special as my mother died exactly 2 years ago.

It took me around 1,5 hours to climb up Mt Ngauruhoe, once up one could walk around the outer crater and the inner crater. The last eruption was not too long ago. At some places the rocks were hot, steaming hot. Incredible views from up there, although some fluffy clouds came by too. 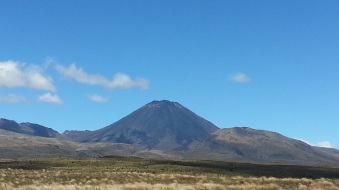 It was a steep climb and I was thankful for all that I learnt about mountain walking/climbing from people I met in my life, mostly the bedouin in Sinai.

Down the mountain was mostly sliding on sand, stones, rocks. I only noticed yesterday that my shoes suffered greatly. Parts of the soles are gone. Wondering how the feet of those are doing who climbed the volcano in sneakers.

Back on the trail I enjoyed all the often stunning views we had missed a week ago due to the clouds and I was back at the carpark after 9 hours of walking, exhausted. I get the feeling that it really changed something in my life. And maybe in other people s lives too. I had offered to two friends to bring some of their current life issues up the mountain to help transform it.

For our quests I had collected small stones from the Tongariro river bed the day before and brought them up to the volvano.

On my first day in Turangi I had walked a river trail along the river for a few hours. Towards the end I felt a connection to the river. It felt different from connecting to a tree and also very touching. It feels like nature is letting me closer every day. Yesterday on my walk I had more of the sensual relationship with the earth. And as my New Zealand trip is slowly coming to an end and as this is only the beginning of a two year walking experience I am starting to wonder where I want to go next. What is clear with the experience of a growing intimacy with the Earth is that I want to continue. Yes. And it makes sense that I am mostly walking alone as only then I can focus on my practice (until the moment when I ll be ready to share the practice with others).

One destination is already very clear as the mountains kept reminding me of my time in South Sinai. I do want to take my walking practice there and see my bedouin friends. Never have I felt a stronger longing and a feeling of home than to that part of the world and the people there. I ll probably go in April. Anybody wants to come? If we have a little group I ll organise a trip.

And then the Camino de Compostela is calling me.

Also I am wondering if to travel through Italy to Malta I could combine my walking with cycling, cycling from walking area to walking area as I imagine more freedom about where I want to stop. Noticing being jealous thinking of D. a cyclist I met who is exploring NZ by bike.

Back to the river and Turangi. This little town came into existence only 50 years ago, when a hydro power station was built here at the Tongariro River. Before the area had been an important place for Maori culture. But Maori were forced to leave their land which was then flooded and where moved to the new town. Naturally this is not a happy little town. A very strange energy, I think I could feel the unsettledness and it affected my mood until I understood that it was the energy of the place.

I also wanted to mention that the  huge Lake Taupo was created by a huge volcanic eruption and then later collapse of the volvano around 25000 years ago. The sand at the lake beaches is black and there are white volcanic stones instead of shells.

I also learnt from the owners of the hostel I stayed at in Turangi that there are huge land masses below the water around New Zealand and with every earthquake more and more land is moving above sealevel.